After going through tons of security, we finally reached the office of Dal Freeman. Dal Freeman has been the head engineer of Lagoon Park, located in Farmington, Utah, for almost 13 years and before then had worked on ski lifts for major Utah Ski Resorts as well as being the main designer and engineer for Arrow Dynamics, a roller coaster company which had been bought up by S&S Power, located in Logan, Utah.

When he got into Arrow Dynamics, it was the company which was owned by Walt Disney only a few years before he died, and was the "imagineers" before the real Disney Imagineers came. As head designer and engineer of Arrow Dynamics, he looked over all roller coasters built by Arrow Dynamics including Magnum XL-200 (his favorite), Drachen Fire, Eagles Fortress, and The Loch Ness Monster to name a few.

When asked his favorite Arrow coaster, he said "Magnum XL-200 is definitely one of my favorites as well as Eagle's Fortress". But "I was sad when Drachen Fire failed as I was excited to create the unique element after the chain lift, something everyone thought impossible". He also actually worked on Jaws and King Kong for Universal Studios Orlando as well as helping with some advice on ET Adventure and being a part of Splash Mountain.

But when Arrow Dynamics started to have some money trouble, he backed out and went back into ski lifts before Arrow Dynamics created X (now X2) and then went bankrupt.

So when he was able to come out of the ski lift buisness and work as head engineer at the park that started it all for him, Lagoon. Once he became the head engineer, he got Lagoon some of its finest attractions yet, including Wild Mouse, The Rocket, 200' S&S Drop Tower, Samurai, the top head spinner attraction, Cliffhanger, Spider, the best spinning coaster, The Bat, Lagoon's first suspended coaster, as well as Wicked!, Lagoon's tallest and fastest coaster. Wicked! was definitely his favortie coaster he ever designed. "When deciding for a new first of its kind roller coaster for Lagoon, I needed a company I could work with, and Zierer fitted everything." Although Zierer is known for their smaller kiddie coasters, they agreeded, and after 3 years of designing, construction, and everything else going into a roller coaster, they created Wicked!, the first and only Tower Coaster in the world. "I always wanted to design an LIM launch coaster, and so we created a modified version of Rock 'N' Roller Coaster's launch to creat an amazing and smooth ride." To do this they replaced the steel wheels with rubber ones, and put the magnets on the car, something never thought possible, but Dal, again, proved everyone wrong. And for those of you who didn't know, "Wicked! is themed to an industrial factory".

After Wicked!, OdySea came, a Dumbo-like rides with water features and a nice soundtrack. This was and still is one of the most themed rides in Lagoon, and is themed to the sea with a giant octopus in the middle. This year Dal created a larger version of Zierer's roundabout ride and built Jumping Dragon, a large roundabout ride with a 40-foot-tall pagoda. When I asked what is next for Lagoon he said, "it depends on this season. If we have a low revenue then we will probably have another small kiddie ride, but if everything goes like last year, Lagoon just might get another kiddie coaster!" And as for the far off future, "Lagoon will sometime get an even bigger coaster than Wicked!, and I am right now in talks with Vekoma, Intamin... and Bolliger & Mallibard!"

Could this mean Lagoon could get its own B&M Dive Machine? Or it could mean an Intamin Mega Lite or Vekoma SLC? Well, I guess we will all have to just wait and find out! And make sure to head to Lagoon this summer no matter where you live as not only could this get Lagoon a new coaster for next year, but this park surely is a high quality park, and you could never have a bad day at Lagoon!

Our affliate, Theme Park News Direct, is re-vamping their site! Here is the news I have recieved:

April 2009 will spell a large number of changes for ThemeParkNewsDirect.com. The community component will no longer be part of our agenda. The forum, along with the whole membership scheme, will be abolished under a new plan for the website.

However, this does NOT mean that we will be publishing less content on the website. We’re doing quite the opposite. News, business and opinion-based articles will play an important role in the site's future.

A news section that is updated more often, an in-depth business section with up-to-date reports, stock prices and let's not forget the thoughts of opinionated theme park junkies, will welcome visitors to the site. Interviews with industry professionals and theme park management will also be another important component of the new content structure.

To give readers almost real-time news, our newsroom will be advertising its e-mail and phone number for the public to submit their news instantly. A stronger tie with press release companies will also help deliver faster news to our readers. For information regarding our news-wire services, please e-mail us.

An improved layout will also help our readers navigate more quickly and efficiently.

Blogs
Blake Newton
...and even more bloggers in the future!

Gravity group has officially released its new trains which seem to be able to endure incredible things, unlike any other wooden coaster car possible. Gravity Group has been known for its twisted wooden coaster designs for many years and now has put its company on a totally new level. Press Release:

"The engineers at The Gravity Group started with a blank sheet of paper and ended up with the next generation of trains for wooden roller coasters.

"Timberliners incorporate new technology - such as magnetic braking and restraint monitoring - that wasn't even imagined when wooden coaster cars were first developed," says Michael Graham, lead engineer for the project. "When it comes to wooden coasters, The Gravity Group has more experience designing rides than anyone. We've applied that expertise in designing trains that addresses every facet of roller coaster performance and function - from maintenance and safety to rider enjoyment and capacity."

Timberliners are designed to be compatible with existing wooden coasters, allowing a park to upgrade their roller coasters with Timberliner trains.

Key features of the trains include:

Additional information about The Gravity Group, LLC and the Timberliner coaster trains is available at their website: www.thegravitygroup.com.

ABOUT THE GRAVITY GROUP

As most might know, Florida parks are getting a lot for 2009 and beyond- and yet they pretty much already have a lot.

And if you don't think this is enough, 2 new coasters are being added for the 2009 season. Manta and Hollywood Rip, Ride, Rockit. These two particular coasters are already going to be put in the record books.

Hollywood Rip, Ride, Rockit is a completly unique coaster. When built, Hollywood Rip, Ride Rockit wil be standing 167 feet high (2nd tallest in Florida) and will also stand as the only X-car megacoaster on earth.

So what are your opinions? Please state your opinion in the forums or as a comment on Roller Coaster Insider!

Revenge of the Mummy: The Ride- Universal Studios Florida

News: Six Flags Is On A Roll

As you might know, Sea World is adding a new flying coaster to its collection in 09'. The Manta flying coaster will create a new level of immersion into the animal world -- in a way only SeaWorld can do -- enveloping riders in a sensation of oneness with the ocean's most powerful and graceful creature as they soar, dive and plummet through the air.. and at times within inches of the sea.

Whether guests choose to ride or not, the attraction is a world unto itself. Floor-to-ceiling windows create mesmerizing face-to-fin encounters with 300 rays, as well as thousands of fish and mysterious creatures native to oceans all over the world. Shark rays, spotted eagles rays, leopard rays, cownose rays, and oscillate river rays float past guests with fluidity and grace in a view new to SeaWorld. Enhancing the feeling of awe, elaborate lighting, sound and rushing waterfalls further submerge guests into this underwater universe.

The experience then evolves from seeing ... to being.

Winter Haven, FL (November 10, 2008) - After months of exhaustive analysis by park officials and owners, Florida's first theme park, Cypress Gardens, will temporarily close on Monday, November 17th, for a major renovation. With a reopening scheduled for March of 2009, the plans include expanding the wildly popular water park, while preserving the history and nostalgia of the original park, with a focus on the original botanical gardens and their worldwide notoriety. The ski show shall continue as part of the original park experience. The existing animal area and the ride area will be permanently closed. "The operating expense of running 38 amusement rides, a zoo, the botanical gardens, a ski show, and a water park are considerable," said Cypress Gardens co-owner Rob Harper. "It is obvious the park cannot successfully function as four parks in one. We have some exciting new plans that everyone will be thrilled to see come March," Harper added.

News: Cobra To Bite The Carolinas In '09

There's a new species coming to the Carolinas, but this is no animal! Carolina Cobra is an innovative new scream machine that will be the park's 12th roller coaster when it makes its much-anticipated debut at Carowinds in 2009.

Carowinds, a 112-acre amusement park located on the border of the Carolinas, will debut Carolina Cobra in early spring 2009. This rebellious 125-foot-tall steel coaster will stand as the second tallest coaster in the park. This large new addition will hover near the entrance of Boomerang Bay, and, coincidentally, happens to be a "boomerang" coaster, meaning that it will travel the same track forwards and backwards. 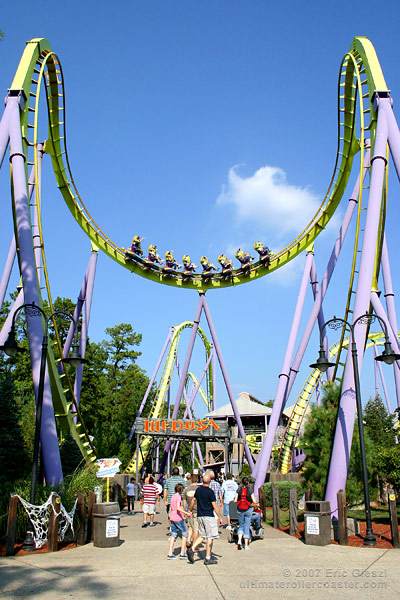 Six Flags Great Adventure, recognized for its award-winning collection of thrill rides, today unveiled plans to dramatically transform the world's first floorless, looping coaster, Medusa. The Medusa redesign will deliver a multi-sensory ride experience with all-new thematics and innovative, state-of-the-art visual, audio and sensory effects launching it into another dimension of thrills and excitement. Unlike traditional coasters, Medusa trains are floorless, giving riders the sensation of flying as their feet dangle above the track. The B&M coaster is one of 13 coasters at Six Flags Great Adventure and has delivered more than 9 million rides since its debut. Guests can take advantage of the last chance to experience Medusa's original Greek mythology theme during the remaining days of Fright Fest. Compelling details of Medusa's multi-dimensional ride transformation will be revealed as Spring 2009 draws near.

News: Kings Island To Add Diamondback To Their World-Class Collection

The biggest and most exciting new attraction in Kings Island's 36-year history, a 5,282-foot long steel hyper roller coaster named Diamondback, will change the landscape for thrill seekers when the ride makes its debut in April 2009. Diamondback will be located in the western themed Rivertown area of the park and will prey over flat land, woods, water and rocks, slithering along nearly one mile of track through gut-wrenching drops, twists and turns, leaving riders feeling snake bitten! Full Press Release